Nikon now lists its KeyMission action cameras as discontinued on its UK and Japan websites, a change first spotted by Nikon Rumors. The maker's UK website lists the KeyMission 80 as "discontinued," though neither the KeyMission 170 or 360 models show the same notice. dpreview.com »

Nikon KeyMission 360 records itself getting chewed on by a tiger

It looks like this tiger was about as frustrated with the Nikon KeyMission 360 as we were when we reviewed it. Obviously frustrated after missing golden hour because she couldn't get the camera connected to her Android phone, she just gave up and chewed the crap out of it. dpreview.com »

Nikon has issued a firmware update for its shockproof and waterproof KeyMission 360 spherical 360-degree action camera that improves stability under iOS 10. 2. It specifically solves an issue with unstable connections between the camera and Apple devices running the iOS 10. dpreview.com »

Nikon have released a firmware update for their KeyMission 360 action camera.

The KeyMission 170 is Nikon's first attempt at an action camera, featuring 4K video recording and a 170-degree lens. Can it compete with the similarly priced GoPro Hero 5? Find out by reading our Nikon KeyMission 170 review. Read the review » photographyblog.com »

Photography is our playground. We play in it everyday: with our phones, DSLRs, mirrorless cameras, etc. We love discovering more about it… we love to hate it. Many of us start by taking our first pictures, we create grotesque edits to help “fix” crappy compositios and play too often with depth of field. Then we […] petapixel.com » 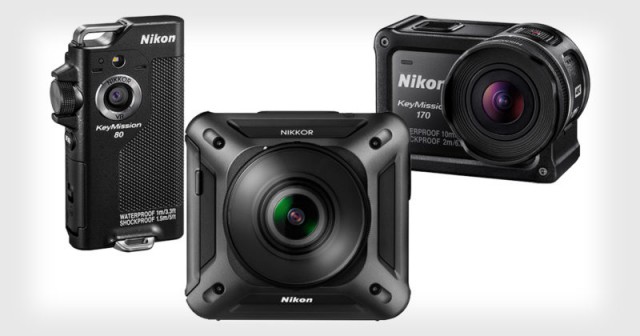 Want to see exactly what the new Nikon KeyMission action cameras look like in the flesh?

AF-S Nikkor 105mm F1. 4E ED Nikon's stand at Photokina is split fairly equally between displays of its DSLRs and demonstrations of its new KeyMission 360, 170 and 80 cameras. We took a look at everything they had to offer, starting with the Nikkor 105mm F1. dpreview.com » $(document). ready(function() { SampleGalleryV2({"containerId":"embeddedSampleGallery_7798641479","galleryId":"7798641479","isEmbeddedWidget":true,"standalone":false,"selectedImageIndex":0,"startInCommentsView":false,"isMobile":false}) }); It was all the way back at CES in January when Nikon first unveiled the KeyMission 360, a shockproof and waterproof spherical 360-degree action camera. dpreview.com »

Following the KeyMission 360 action camera announced at CES earlier in year, Nikon has fleshed out the line with two further affordable alternatives. As suggested by it name, the original KeyMission 360 arrived with 360° capture, recording video in UHD 4K and designed with protection against water, dust, shock and freezing temperatures (naturally, within certain limits). digitalrev.com »